Damp walls have been a common problem for a long time. They occur in every fourth to fifth Swiss household and, in the long term, cause damage to any building structure.

Damp walls are caused by moisture, which either penetrates from the side or rises into the building structure due to capillary effects.

This can be caused by two things:

If the floor moisture is drawn up by the parts of the building that are in contact with the soil, damp travels through the masonry and causes structural damage due to surface evaporation.

Such damage includes salt efflorescence (saltpetre/nitrates), crumbling plaster, sanding and localised areas on plaster and render. This is caused by the constant transport of salt and minerals from the soil, whereby the salt infiltrates the wall in a dissolved form and re-crystallises during evaporation.

Structural damage becomes visible on the inside and/or outside of the building as discolouration and/or flaking paint and crumbling plaster or render.

Unhindered and uninterrupted moisture transport into the building walls can result in financial losses and also have negative effects on the living quality and health of the building’s inhabitants. These include: 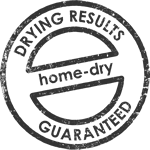